As Smattering of wildlife related news from here:

CATS AND DOGS AND BUGS

WILDLIFE WHO LIVE IN MY HOUSE

More from here soon, and sorry for the Lame-O post.

Would you eat this?

Shopping at Al Fair makes me want to cry. Honest to god, I have never seen such staggering incompetence in Supermarket management / staffing in my entire life. It would appear that not a single person in thier management chain has any concept of food saftey, product rotation, or inventory management. How they have managed not to be shut down by the authourities for health code violations is beyond me.

Today like every other time I shop there, I saw:

Have a look at the picture below: What you are seeing is a bowl of Artichoke hearts, completley covered in mould, with the ones at the bottom beginning to decompose in a bubbling froth of bacteria. When I was in the store yesterday, the artichokes were the same, and the spoon was in exactly the same location, with exactly the same smear of artichoke shmutz on it. Unbeliveable, and Dangerous. 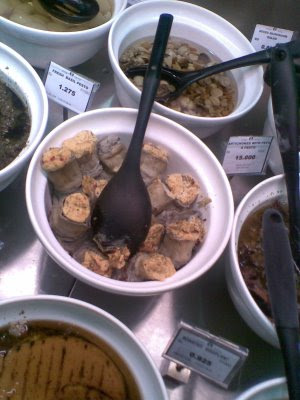 The Seafood salad wasn't fairing much better, and the olives were mouldy too.

Trying to buy anything from the deli makes me want to reach across the counter and strangle the idiotic, lazy, rude girls behind the counter. I stood for five minutes in front of the Deli cabinet, hoping to tell them about the Artichokes, while they gossiped, toaked on thier phones, and flirted, pausing twice to lecture the Indian Baker on something or other. Can someone tell me where they find girls like this? Under rocks? Beauty School Drop outs? I finally tracked down the manager, who was kind and receptive to my feedback on the mold matter.

So, Spinneys? Al Fair? Want to hire a consultant? I'll work for 10% of the money I can save you if you'll let me restructure your ordering, stock rotation, and train your absolutley usless staff. If you give me free reign, I'll also increase your sales, reduce employee turnover, and lessen the odds that you'll kill someone through gross neglence. Sounds like a good deal to me.

Did you guys know it's World Press Freedom Day?

Essa Al Zadjali, (Editor in Chief, and Owner of the Times of Oman) has excercized his right to freedom of speech and freedom of the press by publishing what is, quite possibly, his craziest "Viewpoint" article yet.

According to Essa, This whole Piracy nonsense was set up by the Jews to shut down the shipping lanes through the Suez Canal, thereby Financially Choking an already poor Egypt, and destabilizing THE ENTIRE ARAB WORLD!!!!!

The Editor in Chief of the Biggest English Language Newspaper Belives that Somali Pirates are actually part of a greater conspiracy by the Evil, Zionist Jews and the Evil Western Media. Why didn't I think of that? It's so obvious!

A GREAT number of Arab writers and political analysts have not only accused Israel of sponsoring piracy activities that have recently been on the rise along the coast of Somalia but have also expressed their fears about the role of world powers in dramatising and internationalising the issue of security on the Red Sea in a way that gives Israel ample scope to further its own interests in the region.

The truth is that the Horn of Africa has not just been afflicted by the attacks of a few disparate marauders who surface randomly and try to make a fast buck through ransom. They are, in fact, orchestrated according to a definite strategy to control the navigation on the Red Sea.

The Western media has worked flat out trying to make us believe that a motley bunch of lawbreakers are behind the piracy activities and their aim is nothing beyond getting ransom.

The events on the Somali waters point to an Israeli hand, especially in globalising the issue of security of the Red Sea. The apprehensions raised to this effect are indeed legitimate, particularly when we take into account the theory of Israeli
security which is predicated on the idea of a Greater Israel extending from River Nile to the Euphrates as mentioned in the Protocols of Zion. This pernicious idea preoccupies the mind of each and every Israeli politician regardless of his party or the official statements he makes. Israeli politicians still believe in this theory and dream of making it a reality one day.....

I want you all to Join me in applauding Essa Al Zedjali, Editor in Chief of the Times of Oman, for using front page space, on World Press Freedom Day to help spread ingnornace and hatred throughout the world with his Crazed, Psychotic, Paranoid rant on the evils of Israeli/Somali Piracy.

If he can write and publish these sort of lies and conspiracy on the front page of his newspaper here, then we really do have some astounding press freedoms.

I also want to know how anybody manages to meet him at a conference / dinner and shake his hand with a straight face. I couldn't.


Thanks to Muscati and Pinaki for the Link
Posted by Suburban at 16:46 21 comments: Links to this post