When everything seems right

Stone took me to the Chedi last weekend. We stayed in a Suite, got a couple's spa treatment, and sat around in the enormous bath until we were giant pink raisins.

Saturday Morning, Tariq stopped by with a hard-to-find spare part and an invitation to come up to the family farm next week.

I went to the ROP in Qurm yesterday, and was called by name by everyone I dealt with. I got a hug from Aisha, the teller in the Ladies line. I completed the last details for the color-change for one of the company cars in under 15 minutes.

I took the baby down to the ocean today, and she and I swam in bathwater-warm water and rolling waves for an hour. Then we chased crabs and climed around the cliffs by the water's edge.

When we got home, Khalifa, our company PRO stopped by for a coffee and a chat. He made me laugh so hard I almost peed on myself.

It's days like this that make me so happy to live here, and so lucky to have such wonderful people around me.

Crankyness and bitching to resume tomorrow.
Posted by Suburban at 16:12 3 comments: Links to this post

One more reason to love your truck

I love my Abu Shanab. This is the best FJ 45 video ever, an oldie but a goodie.

Spam from the lovelorn, and some advice.

Does anybody else get spammy love notes like this courtesy of random trolls searching facebook / tagged / blogger? The note below came from Tagged, a program I signed up for accidentally. There's not even a profile photo.

I'm half Omani man :-).. I lived most of my life outside Oman,,,,i'm
back now 2 Muscat.. I love everything beautiful in this life, accepting life in
all its glory and despair., Live for Love and die for it... I like to enjoy
every second of my life and make it the best moment if i could.. i'm single and
looking for a place for my heart :-).

I would like to know u and hope if we can be in touch..

Don't get me wrong, it's a sweet note, very respectful. I note the generally good spelling, something your correspondant could attempt herself of more often. But... Spell check or not, this is not a successfull strategy for picking up chicks.

So, Mr, Lonley, If you want to get a nice and smart girlfriend, one who will stick around, and might eventually sleep with you or become your wife and have your babies, read on...

Second, Buy and use an analog wrist watch. Practice being on time. Being on time is sexy.

Next, you need to start by looking in the paces girls are, and in environments where you can talk to them in the course of doing your job without coming across as a desperate weirdo.

Now that you have strategically positioned yourself in the vicinity of your sort of girls, try to be the sort of guy you would want your sister to date. Seriously, if you wouldn't be ok with your mom or your sister checking out a guy who is acting / dressing like you, then you are doing it wrong.

OK, so now you sort of know some women. You see them once or twice a week at work or social things, you have something in common, she thinks you are cute, and you have given her your phone number or she's given you yours.

If none of this works, remember that you are in Oman, and Dating is hard and not part of the culture here. Also, if your friends or family wouldn't approve of who you are dating, you shouldn't be doing it because they won't let you marry her either. Trust me.

OK. I'm bored with this. Additional advice is welcomed and encouraged in the comments section. More from here as it happens.

Posted by Suburban at 13:29 6 comments: Links to this post

Our woes come not as single soldiers...they march in batillions. Or whatever it was Queen Gertrude said in Hamlet.

Because it's summer, and because clearly, God hates me, we are having some car troubles. I understand car problems are not quite as bad as say, coming down with a nasty case of AIDS, or suffering from simultaneous famine and plague, but still, automotive woes are something of a bummer for me.

Three weeks ago, the front left wishbone on Stone's sports car snapped while he was driving it. We've never been so happy to have a catastrophic failure of a critical suspension component. The wishbone snapped at low speed, a mere 2 kms after two hours of high speed driving on a crowded highway. So we were pretty lucky.

Stone rang the dealership, and they dutifully came and picked it up, but sadly don't have a replacement part in stock. Three weeks later, they still don't have the replacement part in stock, and Stone's baby is sitting in the workshop alone and forgotten slowly being covered with a layer of dust two inches thick. My only guess to the hold up is that the new wishbones are being handcrafted by virgins out of pure unobtanium in the NASA R&D workshop. Hope they'll be worth the wait when we get them.

Next, we have my car "Big Foot". For the last couple of weeks, whenever I park Big Foot or return home after a long drive, there is the unmistakable smell of Petrol wafting around my car. I love the smell of petrol, so I didn't really think much of it, assuming the petrol cap was a little loose, or the engine was running a tad rich, or maybe the fuel injection breather needed replacing. (I have no idea if there is even something called a fuel injection breather, but it sounds good)

But the smell kept getting stronger, to the point that other people would comment on it. So today, when I was in Wadi Kabir looking at the progress on the company car re-spray, I asked the guys have a look and see if we could isolate where the smell was coming from. Having checked everything under the hood, and the gas cap, we decided to check out things underneath. With much flailing of arms and swearing, we got Big Foot positioned over the pits, and climbed down, torches in hand to have a look.

My fuel tank is leaking. A lot. Thank god the engineers designed the exhaust to run paralell down the other side of the car, and not under, or across the fuel tank. Again, we are very lucky.

So I rang the dealership, and after hassling with the brainless fucktards that answer the phones for the better part of 45 minutes trying to be connected to " BRAND NAME SERVICE DEPARTMENT", I was indeed connected to the service department guys, who recognised my voice, asked me to stop crying, told me everything would be ok, and promised to take extra special care of me and the car when I bring it in tomorrow morning. They'll even let me go into the workshop when they put it on the hoist, and I can help take the fuel tank out if I want. Which is so sweet, really.

More on this, and other stuff, tomorrow.
Posted by Suburban at 17:20 16 comments: Links to this post

I spent the morning today wandering through a million little repair and spare parts shops in Wadi Kabir. I was on a mission to find some impossible widgets, meet with a couple of garages regarding my company's fleet of cars, get one of the cars painted a different color and get an estimate for a protective coating extravaganza on the Abu Shenab .

On today's adventure, I was accompanied by none other than the legendary Tariq Al Kiyumi, who is the closest thing Wadi Kair has to a local Sheikh. Tariq runs a spare parts business selling genuine Toyota, Lexus, and Nissan spare parts , which I've written a little about before, Here . While we were collecting widgets and haggling over the price for a custom respray, Tariq caught me up on the latest news from his his corner of Muscat. I'm happy to report that the business is thriving, despite repeated attmepts by Bahwan Toyota to put him out of business.

Tariq only realised that this is my blog recently, something which really cracked me up. I'm going to Interview Tariq here in a couple of weeks, so he can tell the story of being an independent Omani entrepreneur, going up against the Bahwan Monopoly, and various Anecdotes about day-to-day life in Wadi Kabir. Tariq is a really funny, witty, and knowlegable guy, so If any of you have any questions you'd like to ask Tariq, Put them in the comments section, or email them to me Otheroman@gmail.com

Back to Wadi Kabir, places with a million little shops and junk everywhere fill me with insane ideas for what I could have fabricated there. Like how about a new bed with a powder coated steel frame and a headboard made of Galvanised steel with little gears form old transmissions all over it? I am inspired by al the weird old cars piled up and the possibilities for a new and interesting custom Hot-Rod. 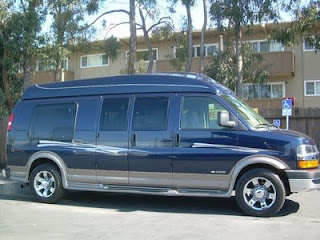 When I go to Wadi Kabir, Stone literally feels ill with dread at the thought that I might find and purchase another automotive project. I have already spent next month's salary on some custom enhancements for Big Foot, but failed to secure the purchase of a Conversion Van.

Because wouldn't that just be Bitching???

Or how about this one? 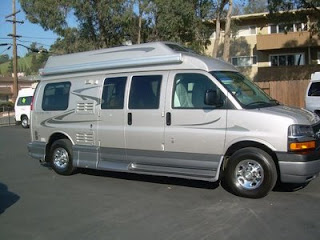 Which has a dining table in the back! 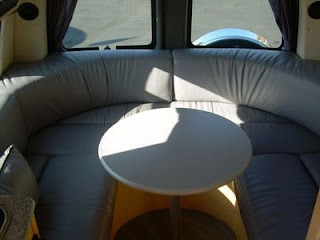 Fabulous, Right? I neeed one.