This is a picture of my family, which was made into a christmas tree ornament by a neighbour we knew when I was growing up. My gorgeous baby sister is missing, as she wasn't born until like ten years later, but I love this photo anyway. Mom looks so happy, Dad looks confident and handsome* and My brother is innocent, smiling and cute, a far cry from the driven, competitive, hard-core Badass he has become today. I'm the girl climbing the tree in the background. 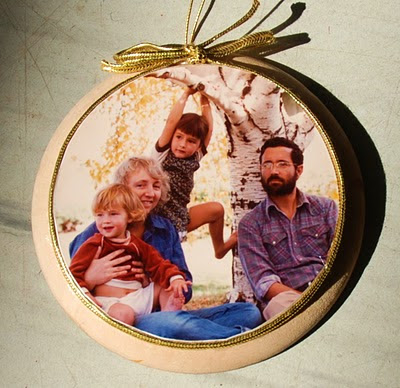 I can still remember the day the photo was taken, and I can still remember the way the bark of the birch tree in the front yard smelled and would leave my skin and clothes dusted in flaky white Birch dust. The woman who took the picture shares my name (was I named after her? I don't remember) and she stiched and embroidered my mother a shirt a million years ago. I stole the shirt from mom, and wear it all the time, because it makes me think of mom, and the woman she was before we, as kids with incessant demands and unrelenting selfishness made her a Mom-Person. Your Identity; the ultimate sacrifice of motherhood.
Now that my sister is safely off in Grad School, and flashing through her exams like a freight train (Straight A's!!!) Mom and Dad are tentatively finding their feet and rediscovering whatever it is that the people they were before we arrived might look like now. We give them grief, make cruel jokes about mid-life crisis etc.. but secretly, we are thrilled for them.
A blog post about other stuff, and how (some but not all) Omani's celebrate Christmas, soon.
* and that beard fantastic, no?
Posted by Suburban at 15:57 No comments: Links to this post

An Open Letter to the Times Of Oman

Dear Sir,
I must vehemently disagree with the viewpoints presented in Fahad Al Ghadani's article (Need for Dress Code at Beaches, Times Of Oman 19/12/09). I, for one, would like to see more foreign women in inappropriate clothing and revealing swim suits on our beaches and in our shops. The scantily clad western tourists provide me and thousands of other young men with hours of entertainment weekly, as well as what is, likely, our only current opportunity to interact with a real semi-naked woman.
Given the lack of any suitable entertainment options for young Omani men in the capital and villages, Girl-watching keeps many of us busy and out of trouble, when otherwise idle hands could turn to crime. It is also worth noting that the revealingly dressed tourists are assisting in confirming the useful stereotype that western women are skanky and easy. On Behalf of young Omani Men everywhere, I beg of you, please do not encourage such dress codes on the beaches.
-Said Al Sardi
AKA Subruban Muscat
Posted by Suburban at 16:50 9 comments: Links to this post

Detroit, city of choice for discerning people like Me and Stone

Over Eid, Stone and I went to Detroit, leaving the baby in the care of mom, dad, and the housemaids. We had an absolutely fantastic time. Detroit is one of the coolest cities in America, full of the nicest people I have ever had the pleasure of meeting. We went there for the first time last summer, and liked it so much we bought an apartment downtown.
I think Detroit gets an unfair rap in the media and the minds of Americans, at least in part due to racism and classicism. The city of Detroit is like 82 percent black, and according to studies, boasts an illiteracy rate of 45 to 50% among ADULTS. The city has been repeatedly victimized by decades corruption and incompetency in local government, and though the new Mayor seems honest and competent, he has a difficult road ahead of him.
Stone and I think there is a great deal of hope for Detroit. Even overrun with abandoned skyscrapers, burned out suburbs, and urban prairie taking over old neighborhoods, we feel that Detroit is full of hope, and opportunity. Detroit is awash in interesting architecture, funky pocket neighborhoods, activities for kids, kind people, ample semi-skilled labor, a thriving arts and music scene, great restaurants, low costs of living, and wonderful downtown parks. I could go on, but you get the idea. I do not believe Detroit is too broken to fix.
Moving on, I thought I would post a few thoughts on our trip to Detroit, and a few vignettes of our time there.
OK, this post is too long already. Needless to say we had fun. I'll post some of the funny stuff we did and saw in a future post. and some more on the British invasion of F1 later in the week. I"m not sure how to write it all up without alienating every one of my British friends. Stay tuned.

Posted by Suburban at 13:54 3 comments: Links to this post

Chef Doug taught me everything I know about cooking. He taught me to treat a tomato right, how to love pork, how to eat salmon raw. He taught me to compulsively prioritize each and every item on my to-do list, never let anyone catch me fucking up, and to never accept anything that was less than perfect.
Chef Doug also taught me a lot of what I know about drug addiction, he taught me how to snort a line of cocaine, how to use a bullet to deliver the perfect kick of Ketamine when I was coming down, and how to push a refrigerator over in a fit of detox rage. He also taught me a little of what I know about making love.
Every time I cook I think of Doug, every single time I see a endive or a heirloom tomato, or a lamb lion or a wheel of gorgonzola or even when I serve my family a dinner that could be better, I think of him. I worked for him for four years, off and on. I met Doug because I used to borrow ingredients for the small cafe I worked at. I went in to his super fancy restaurant one day and asked for a case of portabello mushrooms, ten pounds of parmesan, and a job.
Doug had always smoked pot, but I don't know when he got mixed up with the really serious drugs. He started to get weird at work, throwing pates and hot pans at the girls, missing for hours during a busy shift, storing kilos of the drugs he was selling in the walk-in cooler. I must have brought him to the hospital overdosed on a combo-platter of coke, ketamene, vodka, and meth fifteen times. Even from a hospital bed, still puking charcoal, he always swore he had it under control.
During a busy dinner rush, Doug once looked over at me and said, " I shine brighter because I burn the candle at both ends. Baby, you'll never understand what it is to live like I do." I told him that I would say that at his funeral one day. I feel like a total ass now for saying that. The drugs eventually cost him his job (another story, interesting) , and after that he disappeared from my world for almost a year.
A freezing januray morning in 2001, my phone rang. Doug was on the other end of the line and said he was too drunk to drive and could he crash at my house for the night. I let him in, and asked how he had been. He said he had stopped using coke, how he was totally clean, totally over that bullshit scene. He asked if I minded if he smoked, and I said no problem. He pulled out a glass pipe, and mixed a crack-meth cocktail and smoked it right there on the end of my bed. I rolled over and went to sleep, when I woke up the next morning, Doug was gone. I never saw him again.
Doug died in a single vehicle motorcycle accident, in late 2005. He's dead and buried, but I can hear him inside my head every time I pick up a knife.
Posted by Suburban at 22:54 4 comments: Links to this post